Recently we've been in the market for some new stuff for the bathroom after a spot of re-decorating, we needed a new towel rail,toilet roll holder and a towel ring, or something like that to hang a towel next to the sink.

I figured I could make something similar for much less, so I did, and although it doesn't quite look like an old ladder, it does the job and my wife likes it.

It's made from pine batten,pine dowel and a piece of pine for the top shelf, if you're thinking that doesn't really look like pine, then you'd be right, the colour it has to be said was one of my wife's main concerns, she wanted it to look like it was made from old (ish) wood, so I made some wood stain as well.

To make this all you need are two bits of wood for each side, some dowel for the rails and a piece of wood for the shelf, the size is up to you, but for reference the finished towel rail is 50cm wide by 148cm high and the shelf is 10cm deep.

Making it is pretty simple, basic diy / wood working skills are all you need, and a few tools.

I would recommend making the towel rail slightly angled away from the wall, we have ours over a radiator, and having a slight angle on the rail will allow the towels to hang in such a way that they'll dry faster due to better air flow.

You can put the angle on by eye, or if you have a bevel you can lean one of the side parts against the wall at an angle and use the bevel to set the angle, then you can transfer it to the wood.


The rails fit into each side, the best way to get the holes for the rails in the right place is to clamp your two sides together, use tape if you don't have clamps, and then using a square make a line across the two pieces, then you need to find the centre of each piece where you've marked a line.


Once you have marked out where your rails will go (again for reference I marked mine out so each rail is 25cm apart) all you need to do is mark the centre, if you use shop bought timber it's easy enough to find the centre, if the wood is 40mm (4cm) then the centre is at 20mm (2cm) once it's all marked up onwards to hole drilling.

I made holes in each of the sides to hold the rails (bits of dowel) which I glued into place so there are no obvious fixings, to make the holes I used a spade bit, and using a bit of black tape I marked the depth I wanted to drill to, the main reason for this was because the wood I used is quite thin, and I didn't want to go all the way through.

For the rails I used 18mm dowel, which most diy type places will have, they'll have other sizes, and you can go thicker if you like, I'd say 18mm is the thinnest you want to go though, towels can be quite heavy when damp.

Before I go any further I'll mention the stain (this is something I've been wanting to try for a while) below is a picture of the original colour of the wood and what it stained to.

If you frequent wood working related forums and sites, and Pinterest you'll already know about this, but the stain I used requires two ingredients, fine steel wool and white vinegar, to make the stain chuck a bit of steel wool in a jar and fill the jar with enough vinegar to cover the steel wool,but make sure you'll have enough stain for the job in hand, then leave it for 24 hours or so, then take the steel wool out, easy, just remember to give the jar a shake before you use it.

I gave the wood a good sanding first and then to apply the stain I just used a small paint brush, but you can use a rag as well, just try and get an even coat on the wood, if you want it darker then apply a second coat once the first is dry, and if you make something like this it's best to stain each piece before you put it together, you'll get a better finish.

Next the shelf, you don't have to add a shelf, but I think a shelf always comes in handy, and in this case it made the finish towel rail look a little more like an old ladder.

Here's the wood I used for the shelf -

Now because the towel I made sits at angle if I'd just fixed the shelf in then it wouldn't hold much as it would slope down, to get round that when I cut out the notches on each side, I cut them at an angle that matched the angle the towel rail sits at, this way the shelf is level even though the rest of the rail isn't.

Here's a picture of the towel rail fixed to the wall, this should give you a better idea of why I cut out the notches at an angle, again I used my trusty bevel to get the angle right.

Lastly you may have noticed that there's a wooden plug where I fixed the shelf to the rest of the rail, I could have glued the shelf in place, but as I've used the shelf as the main point to fix the rail to the wall I wanted it a bit more secure, so I used a screw and glued it as well, the trouble is that a screw hole doesn't look nice, does it ?

The plug is made from a piece of 8mm dowel, which I stained and then glued into the hole, it's a much nicer finish, well I think it is, and on the other things I've made for the bathroom I've used the same method of adding a little plug to cover any screw holes, and leaving them slightly proud turns them into a design feature of sorts, once I'd made all the bits and fixed it together I gave it all a good waxing with a hard wearing wax, but a good varnish would work just as well.

To fix it to the wall I just used a couple of corner braces fixed into the shelf, then into the wall.

And there you have it, a hand made wooden towel rail, that cost less than £8 to make, looks good and saves money, can't be bad. 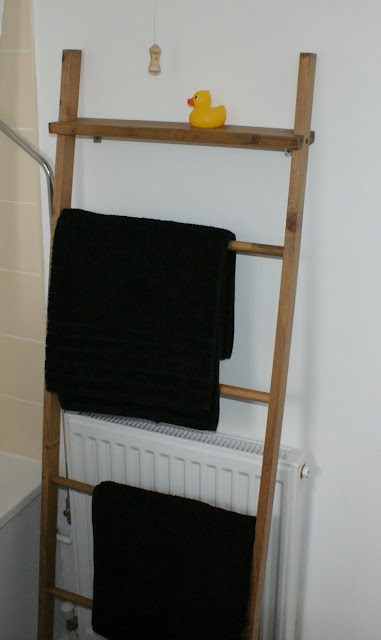