Chicken coop from a pile of pallets ...

For the last week or so I've been full steam ahead on building a chicken coop, we said we'd get some last year, but weren't really prepared for it, now we are, so we have no excuse.

I was lucky as most of the wood to build the coop and run (with a shed load left over) has come free of charge in the form of pallets, 7 foot long pallets to be exact, I saw them in the car park of an industrial unit that was being re-furbished and asked the people doing the work if I could have them, they said yes, one chap even gave me a lift with a load, which when you only have a push bike and small trailer is a good thing.


The only wood I bought was for the main frame work, this I got cheap, the only other things I had to buy were something for the roof ( I've used felt) and wire mesh for the run, and to patch up the fencing where the coop now lives.

You can see the method I used, basically I've just used the planks of wood from the pallets to clad the frame, I've fixed it all together using screws.


We spent some time trying to figure out the best way to build the coop, and it seems there are a lot of conflicting ideas, so we went with what works for us, to that end we've put the nest box on one side of the coop, the main door on the front and the pop on the opposite side to the nest box.

The nest box side -

Luckily as I'm a little bit of a squirrel I managed to find the hinges and bolts for the nest box door, and the main door.

Things progressed quite quickly, although this is mostly down to the weather being good for a change. The whole coop measures roughly 3 feet by 3 feet, the roof slopes backwards from 3 feet to about 2 and a half feet and it's about 5 feet high, I made it like this to allow some space underneath the coop, this gives the chickens some extra room and allows for air to flow around the coop.

The coop and the run have been built in 2 parts, this makes it easier to move about (which we intend to do from time to time) and it makes life easier for cleaning and repairing. We have decided to start small, just 3 chickens for now, and maybe later on down the line we'll get a few more.

All done (well the coop any way)

The run fixes onto the side of the coop, this gives us access to the nest box and the front of the coop (via the main door) we hope the kids will be helping out with the day to day chicken keeping duties, which is another reason for making it easy to get into.

The pop hole, with hatch -

And here it is, all done in woodland green (it's what the fashionable chickens have)

The patch of earth it's sitting on is where our pond used to be, we filled it in so we could have chickens, the whole area was fenced off when we had the pond, so we intend to patch up the fences and when the weathers nice the chickens will be able to come out to play in the larger area, and when we go out or if the weather isn't so good they will be in their run and coop.

The hatch for the pop can be opened easily by hand, but I added a simple pulley type system, so the kids can open and close the hatch, it's just a bit of string and a couple of hooks.

And that's about it, I still have to fit a perch for the chickens, which I already have, just need to put it in the coop, but I want to make a tray to go underneath the perch, which we will be able to slide out to clean out any chicken sh ... ... err droppings.
I'm also planning on using the manure from the chickens on the garden and the allotment, so not only will we get fresh eggs (well in theory) we'll get free fertiliser as well and the kids will learn about chicken keeping.

I'd highly recommend getting hold of pallets when ever you have a building project like this, with the wood I have left (and there's a lot) I plan to fix up my dilapidated greenhouse, and make some more raised beds, and there's the path edging for the allotment, well you get the idea, plenty of uses for the wood I have, and I've saved a load of money. 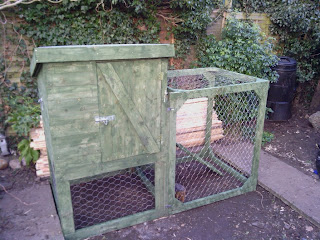 Update - I should have added a more up to date photo of the coop as it is now, shortly after this photo was taken I extended the run, and added a roof over it, although the chickens spend most of their time out in the garden, the run is only really used by them when the weather is bad, and at night.


This is the finished coop -


Shed And Beyond Shop