Last but by no means least, a toilet roll holder, which is the easiest of the three things to make, you should be able to make this in about 20 minutes (no more than half an hour) at least the actual wood working part, it'll take longer because you'll need to let the stain dry.


Again this (like the towel ring) is made entirely from scrap bits of wood, and cost nothing apart from the time to make it, I also used the same homemade stain, even the piece of dowel that holds the toilet roll was a small scrap piece left over from siege engine building.

Here's a picture without the toilet roll -

Size wise, well it should be more or less a standard thing really, having not carried out much research into the size of toilet rolls, but I guess as long as it's big enough for a toilet roll, obviously you don't want a massive one, although this could be adapted to hold rolls of kitchen towel, for reference the toilet roll I used measured about 4 inches / 10.5 cm long and about the same in diameter.

The whole roll holder is about 6inches / 15cm in length, that's 5 inches (12.5 cm) for the back plate that holds it onto the wall and about half an inch (1 cm or so) either side for the arms that hold the toilet roll, the piece of dowel is 5 and a half inches long (14cm)

Here's diagram with the sizes on it -

To get the dowel to sit in each arm I used a small Forstner bit (hinge cutter) to make a hole, and to get it so that each arm had half the hole I clamped the two arms together and then once I'd measured where I wanted the hole to go I drilled the hole, so that the point of the Forstner bit (hinge cutter) was lined up in between the two arms, as the next few pictures show.

Marked the line and clamped into a vice -

Obviously you'll need to make the hole deep enough to fit the dowel into it, other wise every time you use the toilet roll it'll fly out of the holder.

To fix it all together I drilled into each side, and again I've used plugs to cover the screw holes, I only used one screw on each of the arms, normally I'd use two, but as this doesn't need to be super secure I used the one screw and some wood glue.

And that about it really, a very simply made toilet roll holder. 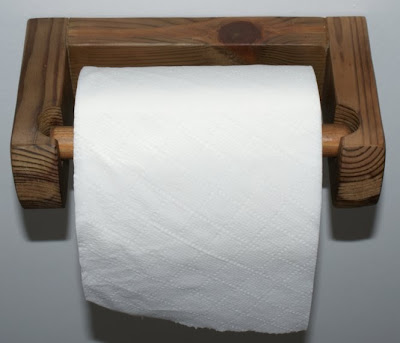