I still haven't managed to get through the large pile of pallet wood I have, but I have managed to use a bit more making a play kitchen for the garden, it's pretty simple design wise but it will last and will take being played with vigorously (hopefully)

The only thing we bought to make it was a plastic bowl (cost a quid) to use as a sink, all the wood came from pallets.


It could easily be built using bought wood, plywood may be best, but if you can get hold of them a pallet or two will do just as well, I've given it a good sand and just finished it using Teak oil, but you could wax it,paint it or just leave it, obviously some kind of coating will protect the wood and it will last longer.

Here are some diagrams of how to build it, hopefully they should be easy to follow, just click on any of the pictures to en-large them.

This is a case of making two 'A' shaped parts, one for each side of the kitchen. 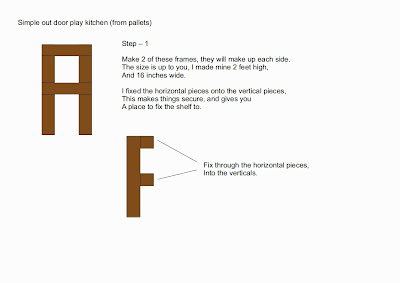 I've been lucky because the pallets had nice usable lengths of wood, this is what the frames I made look like.


Once the frames are done it's just a case of cutting lengths of wood for the work top and the shelf underneath.

Step - 2, adding the worktop and shelf. 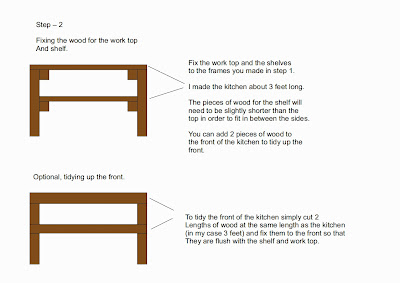 You should get the idea from the diagram, but if it's not too clear here's what mine looked like after step 2.

As for the construction this is about as complicated as it got, doesn't quite look like a kitchen though does it ? and to be honest it could have just been a play bench, kids are pretty good at using their imagination, but I thought I'd add some extra authenticity, you can also see the small splash back I fitted, this is optional.

Step - 3, fitting the splash back.

I wasn't being to accurate to be honest, going for function and durability rather than form, but making the frames a few inches shorter would have avoided this, although it does help to keep things square and more rigid, just in case the cooker gets extreme, and because mud weighs a lot.

Here's a plan of the top of the kitchen, we opted for a bowl that's about 30cm across, obviously you'll need to make a hole in the work top to fit the bowl, or you could just have it free standing.

Lastly I added two circles of wood to the top to act as hotplates, the bowl goes on the left, leaving a work area in between, I even made two small cooker controls for the front, otherwise there would be no way to turn the cooker on and off ;-)

One thing to remember if you use planks like I have you will need to add some extra support to the bowl area if you cut out a hole to fit it into, other wise the planks will flap about all over the place, just add a strip of wood on the underside of the work top near to where the bowl is.

Here's a couple of pictures of the controls -


To make them I cut out two piece of wood using a hole saw in a drill, hole saws look like a round saw and you can pick them up quite cheaply, then I stuck a strip of wood across the circle and gave them a sand to shape them a bit better.

Fixing the controls is easy as well, I just screwed through the front of the kitchen, but left them loose enough so that they will turn.

A close up of the cooker controls -

That's about it really, I did give it a good sand with my belt sander, just to make it smooth and reduce the chance of the kids getting splinters, then I just finished it with Teak oil which will help protect the wood.

And here's the finished kitchen again -

I'm still thinking about adding an oven section, but for now the kids seem to be quite pleased, so I might leave it as is, unless of course they request an oven at some point.


Shed And Beyond Shop