Better late than never, a project for Christmas...

Now I know that it's pretty much the end of January, but hang in there.

I did mean to write about last years Christmas decorations, but as you know time marches on and before you know it the moments passed.

So on that note this post is one to put on your list of stuff to make for this Christmas (and yes I know it's a way away, but time marches on remember)

For years we've been making our own decorations, and not just for Christmas but for various other times of year (like Halloween) and I decided I'd make something for the tree and it's something I've been meaning to make for a while.

Yes I made wooden light bulb style ornaments for the tree, which I'm pleased with, I think they worked well and they are a good addition to our decoration collection.

I did try to make them from a bit of scrap Pine at first, but I wasn't happy with the end results, so I recycled a bit of Beech from an old table leg, so not only do these look good on a tree, they were free, all it cost really was a bit of time.

As I said the Pine didn't work well as I couldn't get a finish I was happy with, especially when I applied the wood dye, but the Beech worked a lot better.

Here's the Beech, I didn't use a hole leg, just a couple of sections off one end -

The dye I mixed myself, I have a number of purpose bought wood dyes, but not in purple which is one of the colours we use on the tree every year, not loads of it, just little bits of purple here and there.

To make the purple I simply mixed a bit of blue and red wood dye together (blue and red make purple if you didn't know that already) I did have to tweak it slightly until I was happy with the colour, but I think it worked, and the grain still shows through the dye, which I wanted.

I have also in the passed experimented with printer inks for dying wood, these also work well, and you can sometimes pick up cheap refill kits from places like poundland.

For the part of the bulb that's meant to look like the screw in part I used some silver paint, we have various pots of paint about the house, the one I used is cheap to buy, about £1.99 from our local diy shop and it dries quickly and is water based.

I made some little eyes for each bulb so that we could thread some natural string through them and hang them on the tree, I just used some silver garden wire for this.

The eyes are just a bit of wire twisted round to form a loop, it's easy to do, just twist a bit of garden wire around something round, in my case it was a wire staple, which was the first thing I grabbed and clamped into my vice, but a nail would do just as well.

To fix the eyes into the bulbs I drilled small hole and twisted them in, they are very secure, but you could always add a little glue to make sure they don't pull out.

And there you have it, I made six in all, unfortunately we couldn't hang two of the decorations on our tree because although they weren't huge they did weigh a fair bit (I made them from Laurel) and as we decided to get a real tree this year (one with roots, so we can use it again and again) it wasn't able to take the weight of them, maybe next year when it's a bit bigger.

Obviously this is a project for a lathe, but if you know someone who has a lathe or maybe you're a member of a club that does wood working then perhaps you could have a go, or maybe this year will be the year you decide to learn how to turn wood and you'll get your own lathe?

I have also made a light bulb shaped pull for the light cord in our bathroom, which I though was quite funny, because it turns on a light and it's light bulb shaped... ... but no one else thought so. 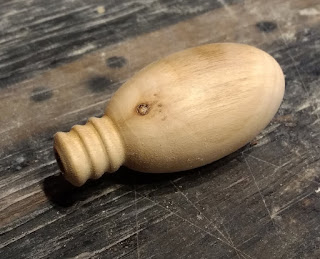 Thanks for reading this very late or very early Christmas post.