I don't consider myself to be an expert in all things wood, in fact more often than not I find I'm left puzzled by the way some woods behave, despite my best efforts to prevent said behaviour, I do learn though, probably learned more about different types of wood in the last few years than I have my whole life.

And  few weeks ago I got another lesson, in Leyland cypress which is also known as Leylandii, yes the scourge of the neighbourhood, in fact there was a program on the BBC the other day all bout this particular tree ---> Hedgewars (opens in new window)

I know that these trees have caused endless arguments all over the UK, there's a good chance that when you look down your street you'll probably see some, I always liked them when I was a kid as the larger tree's are pretty good for climbing, if you don't mind getting covered in the sticky sap that is, and now I have an new appreciation for them, in a slightly different form though.

I've been on the look out for new supplies of wood to turn and I put an e-mail out to my local freecycling group and I got a surprise in the form of a chap who had just cut down a load of them, in fact there were quite a few and some as tall as 40 feet or more, so I now have a pretty large pile of wood, and I've only made one trip, got loads more to go.


It is still very green wood (which just means it hasn't be cut down for long) and I was a little worried about cracking and warping, turning exposes the heart wood and forces the wood to dry out faster than it would do normally, but this pot has been in the house for a few weeks and so far it's fine (it's now in my shop) I do this with all my turned stuff, once it's finished I bring it in the house if it cracks it's no good for selling, if it doesn't it goes in the shop, kind of like quality control :-)

Having this wood has also changed the way I approach turning, hundreds of years ago people didn't dry wood out in kilns, they just cut it down and turned it roughly and then left it for a few weeks, then they finished it off.

This is how I'm looking at the wood I use for turning, I cut it to a good length and leave it for a week or 2, then I turn it roughly, then leave it for a week or 2 then I finish it, and it seems to work, not sure this would work with some of the fruit wood I have, but it's worth a try, yes it takes longer, but I'm getting less failures, and it's still quicker than leaving a bit of wood for 2 or more years for it to season.

So if you happen to notice your neighbours hedge growing a little tall, just take a minute to think about how nice looking this wood is, and instead of cutting it all down and burning it, why not try your hand at carving or turning it :-) and if you don't want to, some one else might want it, maybe your friendly neighbourhood wood turner.

Leylandii can grow 1 metre a year, and no one actually knows how tall they will get,some have speculated that they may even get as large as Redwoods, which is huge, Leyland Cypress (Leylandii) are actually a hybrid tree, their parent species being Monterey Cypress and Nootka (Alaskan Cypress) at least that's according to this page on Wikipedia - Leyland Cypress (opens in new window)

I'll leave you with a few pictures, thanks for reading. 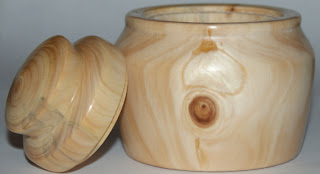 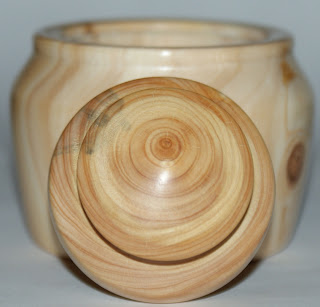 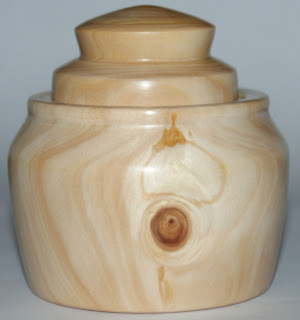