Yes I built my own polytunnel and it only took six years, well it took a couple of days really, but it's taken me six years to get round to it, I did think about building one when we first got our allotment but if I'm honest we soon filled up the space so we put it on hold, but now that we have a much larger plot we decided to build one.

And here it is, with it's nice polythene coat on -


It's made mainly from wood and some bits and pieces I had lying about, to get the curve in the roof I used some old yellow gas pipe I have, which I've been using to make covers for our veggies to stop the birds and other animals getting at them.

The construction was easy enough, but if I were to make another one I'd probably do things differently, but saying that it works and it's pretty sturdy for what it is.

I made the frame work from 2.4 meter lengths of 63mm x 38mm cls timber, some of which I cut in half on my table saw.

The frame done, starting on the uprights -

Better view of the work so far -

Adding some extra support to the uprights -

Okay, pretty straight forward so far, the base is about 18 inches longer than it is wide, so the whole thing ended up being 8 feet wide by about 9 1/2 feet long and overall it's about 6 feet in height plenty big enough for our new plot, and we should be able to get a good crop of tomatoes and other heat loving plants, like melons if I'm honest I'd quite like to get a good melon plant growing, but I digress.

So I've got the base done, and the uprights and I've added some extra support, now onto the roof sections, basically for this I'm using gas pipe, which is a pretty tough plastic tube. it does bend, but not as much as the blue water pipe you can buy.

To fix the pipe what I did was to make holes in the ends of each upright using a forstner bit, a spade bit would do just as well, the idea was to use some old rungs from a climbing frame to slip the pipe onto, the reason for this is because I'm building the polytunnel in our back garden, at some point I'll need to take it apart and transport it to the allotment, so I'm making it as sort of a kit basically, one that can easily be taken apart and put back up again.

The plastic pipe fits snugly over the metal tubing -

Doing things like this meant I could detach the roof section in one part, just a case of sliding it off the metal tubes, and now to explain the metal strap, as I'd cut the wood in half it was on the thin side really for drilling into with what turned out to 19mm bit, and because of this the wood was in danger of cracking where each tube went into it, so I made some straps from an old steel band (one that used to hold a packing crate together) I put a strap round each upright where I'd fixed the metal tubes in, this is enough to reinforce the wood and stop it cracking (I hope)

And that was about it really, I added a beam that runs from front to back to give more support to the roof struts, mainly because I wasn't sure how much weight it would take once the polythene went on, and I also added a door (always handy) and some diagonal supports on the front and back ends.

Here are a couple of pictures of it up on our new allotment plot, before we gave it it's coat, this should give you a clearer view of how it's made, as I said I made it up as I went along, and although it might not be built like a conventional polytunnel / greenhouse it works, and it's sturdy enough to cope with strong (ish) winds, and of course it was cheap, in the end it cost about £45 and we have plenty of polythene to patch up any holes that develop, in fact we have enough to cover it completely again. 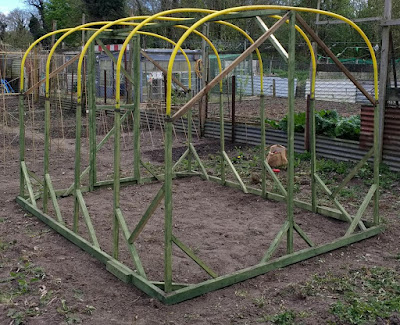 And here it is again with it's coat -

A couple of points before I go, I've used white duct tape to tape up the few joins in the polythene I may upgrade this to small wooden battens at some point, I also ran lengths of the tape over each roof strut and wrapped the metal straps in tape as well mainly to stop the plastic catching and tearing on any rough bits, I do also need to add some wooden battens to the door to hold the plastic on better, I used clout nails and staples to fix the plastic in a few places while we put it on, but mostly the plastic is tucked underneath the framework and I have also built up the soil all the way round the polytunnel, this will also help keep the plastic where we want it and not on someone else's plot after a strong wind.