So carrying on from our Trebuchet project we decided to make another type of siege engine, this time an Onager (sometimes referred to as a Mangonel) which is a type of catapult, but instead of using a large weight and gravity to fling an object this uses a different kind of method, the torsion bundle.

The name 'Onager' comes from the Greek word for ass (the donkey type) the reason they gave this device that name is because it kicks when it's fired, much like a donkey (ass) these types of devices were used as far back ancient Greece, and were widely used by the Romans for siege warfare, I also found references to small devices similar to the one we've built being used in the trenches in world war one, for firing hand grenades into enemy trenches and into no mans land.

The picture above is as it says the Mk 2, the Mk 1 needed a bit of tweaking due to a range issue, that being it didn't actually have much, the Mk 2 on the other hand does, and as a result I've kept the torsion quite low, we can almost clear the garden with this one, any more power and we'd be in trouble, how ever I do plan on taking it out to an area where we can really see what it's capable of, and adding more to the torsion to see just how far it'll throw an object.

Building one is not that hard, it does require some basic wood work skills (like the Trebuchet) the most problematic part for us anyway was getting the torsion right, and as I mentioned we had to tweak it to increase the range.

The basic frame work (made from 3.5 inch x 1.5 inch timber, 32mm x 82mm) which you can buy from most diy type places, the bit I used cost £4, I've used 3 inch screws to fix it together, and once again I used dowel to plug the screw holes, the cross bar in the middle is to help stop the torsion bundle from pulling the two main sides inward.

I was going to use thinner wood, but I felt better making it a little more sturdy, for the holes for the rope to go through on either side, I drilled using a 22mm spade bit (you could use a forstner bit, or large drill bit) the main reason for making them that size was because I decided to reinforce the holes for the rope with 22mm copper tubing, which I made two eyelet type section with, then made two flat plates to fix to the wood.

The copper parts for reinforcement -

I made the eyelet by folding over the end of a bit of tube with pliers, then tapping it with a hammer, the plate is made from tube I cut then flattened out, then I made a hole in the centre for the eyelet to go through, these parts then fix to the main frame.

Here they are fixed into the main frame -

And in the next picture you can see I've fixed the plate to the frame with copper nails, I've also drilled two holes diagonal to each other, these holes will hold small bars that will stop the rope unwinding.

Plate and eyelet nice and secure -

It has to be said that on a model of this size I could have just used some thick plywood instead of going to the trouble of making parts out of copper, but if I'm honest I was going more for the look of it, but these do help to stop the wood getting chewed up.

Again where I've used brass bar, you could use bolts, or wooden dowel, but although the brass is pretty sturdy, it won't snap, I was going more for the look, I could have just as easily used the steel rod I have, or indeed wooden pegs.

Here's another picture I took while testing things -

For the stop bar assembly all you need are two uprights with a bar across the top, then two angled pieces on either side to help absorb the impact and add some extra strength, after all you don't want the frame shattering when it's fired.

Here's a picture with the parts labelled -

Here's the frame work from another angle -

As for the throwing arm, it's pretty simple to make, I had to glue and screw two bits of batten together, and in total the arm is 23 inches (58.5cm) long, I've gone with the three peg method (the same as the Trebuchet) although this wasn't the original idea (hence the Mk 1 and Mk 2) I also made a groove about an inch up from one end of the throwing arm for the rope to sit in, again you don't have to do this as the rope will hold it in place.

The end of the throwing arm -

Okay so we've almost finished, now we should really add a method of firing this thing, one that means we can be out of the way when we fire it, this I found was an easy problem to solve with the help of four eyes (four eyes really are better than two) I screwed two eyes into the main frame, and made a firing pin from another eye, to which I tied a length of string.

The main section of the firing system -

I could have not bothered with a firing system, but even though this is a small device it still packs a punch, and I figured safety was a good idea, especially as the kids will be using it in the garden no doubt, and besides it's more fun this way.

The next part of the firing system is the fourth eye, which is fixed into the throwing arm, the idea being that when the device is loaded the eye on the throwing arm fits between to two eyes on the main frame, the firing pin then goes through the three eyes to secure it, the principle being that giving the string a good yank will slide the firing pin out and fire the device, you can see it in action in the video I've included at the end of this post.

Here's a picture of it loaded -

As an added safety feature I also drilled a hole in the end of the firing pin so that I can put something through it when the device is loaded that will prevent it being fired by accident.

Here's some pictures of the three pegs at the other end of the throwing arm, it's basically the same design as the Trebuchet we made, with a slight difference. We added metal rings to the sling, we found this gave it a better motion and in so doing gives us a good range, I had to add extra bits to the side pegs to stop the metal rings sliding off.

The sling end of the throwing arm - 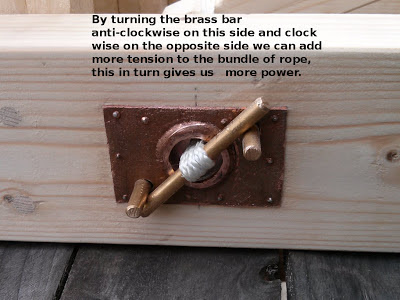 The way this works is that when you twist the rope the throwing arm stops it from unwinding, you can then use this torsion to make the throwing arm move and fire a projectile, the rope we used was 6mm cord we got from one of our local diy shops, any man made type cord or rope should be good for this.

Here's a short video where you can see the twisting motion as the throwing arm is pulled back, you can see how the rope wants to unwind, but can't.

Once again my lovely wife made the sling out of crotched string, she also made the basket for the Mk1, however due to a slight error on my part the Mk1 didn't have any range, in fact the furthest away from the device I could get anything to travel was about four feet, not good.

We'd originally figured we'd make a basket type set up, like a catapult, so I made a wooden ring, and my wife made the basket, but it wasn't very good, and it seem that after a bit of reading the basket type catapults might actually be a spot of miss-direction as it would appear that although there are numerous drawings and accounts of catapults being made with baskets or small bowls on the ends of the throwing arm, most used slings, and some have speculated that this might be down to siege engine builders trying to keep the secrets of how they made things, well a secret, after all you can't have everyone making them, and there is a big difference in how the basket and the sling perform in terms of range and speed.

And that's how to build an Onager, all be it a rough guide, and below is a video of it being loaded and fired by my kids, I plan to make another more powerful torsion bundle for it, but I'll have to test it some where with more space, so I'll update this post with another video once I've done it.

On my command unleash hell ! -